This article will go over the Army Corps Rank system in detail so you can understand what it means for your career, how it’s determined, and what each rank means. It also discusses the Army Corps of Engineers and why they should be considered when deciding on military service. 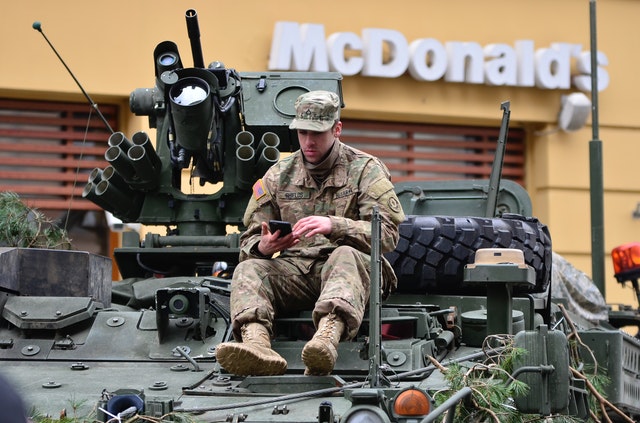 Enlisted Soldiers are considered the backbone of the Army. They train in a particular job and utilize the skills within their unit. They properly perform their job functions, and their knowledge ensures the success of their unit’s mission within the Army.

Enlisted ranks are broken down into three groups: Junior Enlisted (E-1 through E-4, NCOs (E-4 through E-6), and Senior NCOs (E-7 through E-9). The Army ranks in order for Enlisted Soldiers are as follows:

Private is the lowest enlisted rank during basic training. This rank does not carry insignia on the uniform.

After completing Basic Combat Training, almost all soldiers receive the rank of Private Second Class. This is the first promotion for the majority of enlisted soldiers after completing basic training, or they will get promoted after serving six months in the Army. The soldier will perform the skills and knowledge acquired in their new job. They will also follow orders from higher-ranking supervisors. 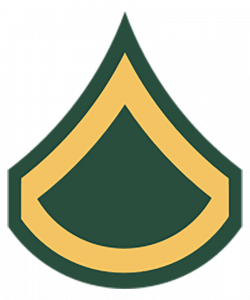 Within a year, soldiers will typically be promoted to Private First Class. Soldiers holding this rank are important to this branch. They are known as the backbone and workforce strength of the Army. E3 is the key that soldiers will begin to transition to carry out orders and complete their missions.

Specialists and Corporals are both E-4, but Specialists have fewer responsibilities than Corporals. While specialists are put in charge of lower-ranked enlisted soldiers, a soldier can be promoted to this rank after serving two years and after completing a training class. Service members with a four-year degree may enter basic training as a specialist.

Sergeants are supposed to be efficient leaders. They are the keys to making missions happen. They guide the junior enlisted in order to ensure the mission is done properly and according to the orders from the higher-ranking authorities. Sergeants oversee junior soldiers in their day-to-day tasks and are considered to set a good example as an NCO (Non-commissioned officer). 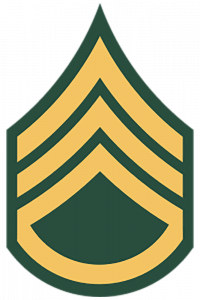 Generally speaking, staff sergeants and sergeants have similar duties and responsibilities, but in fact, E6s will be in daily contact with a larger amount of soldiers and generally have more equipment and property to maintain. The E6s will also have one or more sergeants who are under their direct leadership. They will also be responsible for the continual development of their soldiers’ full range of potential. 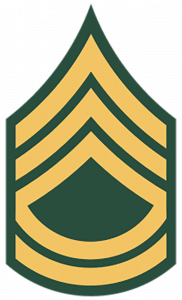 This rank normally means the soldier has 15 to 18 years of military experience. This level is now considered a senior NCO (Non-Commissioned Officer). Their duty entails being the key assistant and advisor to the platoon leader. They have to make quick and accurate decisions for the mission at hand.

The Master Sergeant is supposed to be the principal non-commissioned officer at the battalion level (or higher). While they do not have the same roles and responsibilities as the First Sergeant, they are supposed to lead with the same duties as a First Sergeant. 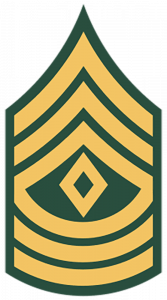 The First Sergeant is the principal NCO and is often known as the lifeblood of a company. His responsibility is to discipline and counsel the soldiers in his unit. The first sergeant has the duty to conduct formations, instruct platoon sergeants, advises the Commander of the unit, and assist in training the enlisted soldiers. When mentioning this rank, they are not called “Sergeant,” but “First Sergeant.” 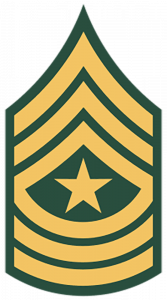 Sergeant Majors’s professionalism is the chief administrative assistant for an Army headquarters. They are vital members of staff elements at the battalion level or higher. Their experience and abilities are similar to command sergeant majors, but they are limited to leading those that are directly under their charge. 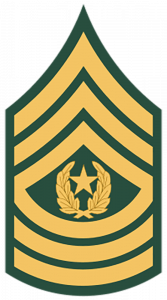 Command Sergeant Major is known as the enlisted advisor to the commanding officer. Their jobs are to carry out policies and standards and help in advising the commander. They advise and initiate recommendations to the commander and staff in regard to the support and well-being of the company.

Sergeant Major of the Army (E-9)

There is one and only Sergeant Major of the entire Army. The E9 oversees all non-commissioned officers and serves as the senior enlisted advisor and consults the Chief of Staff of the Army.

Warrant Officers are known as adaptive technical experts, combat leaders, trainers, and advisors. They hold warrants from their service secretary and they specialize in particular military technologies or capabilities. They acquire their authority from the same source as commissioned officers, but they are referred to as specialists, compared to commissioned officers, who are considered generalists. The sequence of ranks for Warrant Officers is as follows:

Warrant officers are considered the tactical and technical experts of the Army. WO1 is the base-level rank, and primarily supports operations from a team or detachment through a battalion.

This rank is considered an intermediate-level technical and tactical expert. Their responsibility is to support levels of operations from a team or detachment through a battalion.

This rank is considered as an advanced-level technical and tactical expert. Their role is to support operations from a team/detachment through a brigade.

This rank is considered a senior-level technical and tactical expert. Their primary duty is to support brigade, battalion, division, and corps operations.

This rank is considered a master-level technical and tactical expert. Their primary duties include supporting brigade, division, corps, echelons, and command operations. They specialize in warrant officer leadership and representation responsibilities within their respective commands.

Commissioned officers are known as the managers, problem solvers, key influencers, and planners in the Army. So, apparently, they hold the highest ranks. They lead enlisted soldiers in all situations. Their duties include planning missions, giving orders, and assigning soldiers tasks to complete missions.

Army officer ranks are in three tiers: company grade (O-1 to O-3), field grade (O-4 to O-6), and general (O-7 and above). The US Army ranks for Commissioned Officers are as follows

Service members of this rank are addressed as “Lieutenant.” This is the entry-level rank for the majority of Commissioned Officers in the Army. Their job consists of leading a platoon(s), which initiates leadership training they will need throughout their military career.

Service members of this rank are also addressed as “Lieutenant.” This rank is considered a seasoned lieutenant normally with 18 to 24 months of service. As a senior Lieutenant, members will be looked at for the position of Executive Officer (XO) of a company (consisting of between 100 to 200 soldiers).

Service members of this rank are addressed as “Captains.” Captains will be put in charge of and control a company (between 100 to 200 soldiers). Other jobs include becoming an instructor at a service school or becoming a Staff Officer at a battalion level. 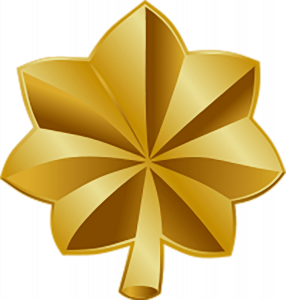 Service members of this rank are addressed as “Major.” Majors are considered field grade officers, and they serve as primary Staff officers for the brigade. They are also part of task force command in regard to personnel, logistical and operational missions. 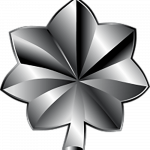 Service members of this rank are addressed as “Lieutenant Colonel” or “Colonel.” At this rank, they are put in charge of battalion-sized units (can range between 400 to 1,000 soldiers). During this time, they can also be looked at for brigade and task force Executive Officers.

Service members at this rank are referred to as “Colonel.” They normally are put in charge of and command brigades (between 3,000 to 5,000 soldiers). Another responsibility at this rank will be becoming the chief of divisional-level staff agencies. 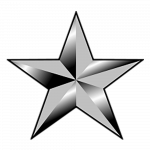 Service members at this rank are addressed as “General.” They serve as the Deputy Commander to the commanding general for Army divisions. They will assist in coordinating and planning missions for the Army. 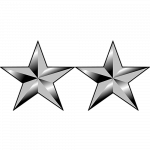 Service members at this rank are addressed as “General” (or two-star). Will typically command a division unit (10,000 to 15,000 soldiers). 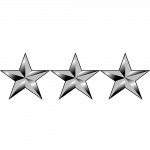 Addressed as “General” (or three-star). Their main job typically consists of commanding corps-size units (20,000 to 45,000 soldiers). 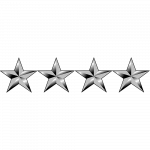 Addressed as “General” (or four-star). This is a senior-level Commissioned Officer that has over 30 years of military experience. At this rank, they command all operations that fall under their geographical area. The Chief of Staff of the Army is a four-star General.

General of the Army (GOA) 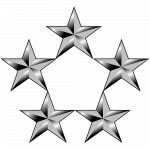 This is a rank that is only used during the time of war. The Commanding Officer must be of equal or higher rank than the opposing commanding armies from other nations. The last officer to hold this rank served during and after WWII.

What is the highest rank in Army?

The five-star General of the Army is the highest rank in the Army. It is represented by five stars, one for each military service. Although it is still part of the military service rank system, no officer has been promoted to it since the rank was created during World War II.

What are the army’s lowest ranks?

As a Private, an enlisted member joins the Army. Enlisted recruits advance to Private First Class after finishing basic training. The next significant step up is to Noncommissioned Officer.

What rank should you be after 20 years in the Army as an officer?

Enlisted for 20 years, between an E-6 and E-8. Officer, O-4 to O–6.  This varies greatly based on military needs, turnover, cutbacks, combat or no combat, duty stations, and personalities.

What is the oldest age to be an army officer?

Enlisted soldiers can join the Army at the age of 35, whereas officers must accept their commission before the age of 31. However, depending on the need for specific roles to be filled, the Army may be able to lift some restrictions.

Is a four-year degree required to become an officer in the Army?

Commissioned officers typically have a four-year college degree or higher when they join the military. Enlisted service members can get advanced and transition to officers in some cases during their military career.

Hope that after this post, you can grasp all the information you need about the U.S Army ranking in order and find the job you want.