When you join the National Guard, you join a team with a mission, and you put yourself in a position to succeed. You’ll gain job skills and leadership experience during your civilian career, putting you ahead of the competition.

Physical and mental toughness are the most important requirements. It all comes down to dedication. A promise to yourself. A commitment to the people around you. A dedication to making a difference, assisting those in need, and upholding the American ideal.

It takes drive—the kind that doesn’t fade when impossible obstacles confront you. Mitigation, teamwork, and the desire to accomplish something larger are required. The Guard is looking for you if you’re looking for something more.

The National Guard is a unique element of the U.S. military that serves both the community and the country. The Guard responds to domestic emergencies, overseas combat missions, counterdrug efforts, reconstruction missions, and more. Any state governor or the President of the United States can call on the Guard at a moment’s notice. Guard Soldiers hold civilian jobs or attend college while maintaining their military training part-time. Guard Soldiers’ primary area of operation is their home state.

How to Join the National Guard? 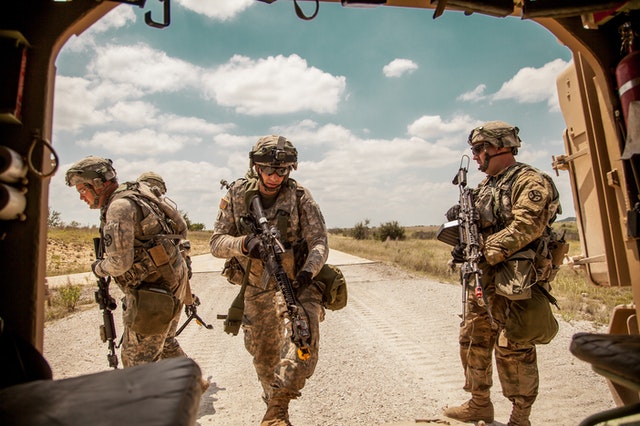 Fill out the form and a Guard recruiter will contact you to answer all of your questions. Get the conversation started, with no obligations on your part.

Once you and your Guard Recruiter agree that you’re a good fit for the Guard, your next step is to take the Armed Services Vocational Aptitude Battery (ASVAB) test, which determines which jobs you qualify for. If you haven’t already taken the ASVAB, take your time to study and train yourself with our free ASVAB practice test 2022. Thousands of ASVAB practice questions and our unique gamified learning technique will boost 100% of your confidence. Take it now!

At this point, you will lock in your Basic Combat Training ship date,  and take your Oath of Enlistment.

You enlist while you’re still a junior (you must be 17 years old to enlist and have permission from a parent or guardian), finish that year, and attend Basic Combat Training during the summer between your junior and senior years.

Until you ship, it’s one weekend a month. RSP is all about getting you ready to excel at Basic Training, so you’ll learn Guard rules and structure, and start fitness and classroom training.

It’s hard. Intense. Demanding. You’ll love it. Basic Combat Training (BCT) is a 10-week intensive course of exercises and drills designed to toughen you up inside and out. The time is broken down into three phases of roughly three weeks each, designed to take you from an ordinary civilian to a Citizen-Soldier®.

It’s time for practice. In 10 weeks, you’ll be stronger than you’ve ever been, and ready to be part of the team that protects America.

The length of time for deployments will vary, depending on the situation. State active duty missions usually run from 15-60 days, while federal deployments are usually a minimum of 12 months. Guard Soldiers may also choose to volunteer for active duty assignments (for example, Border Patrol), and again, the length of deployment will vary.

Read more >> How much does National Guard Pay?

FAQs about Joining the National Guard

What does the National Guard do?

As mentioned above, this is a unique branch of the U.S. military that takes on both state and federal responsibilities. The National Guard regularly responds to domestic emergencies such as natural disasters and also supports military operations overseas.

How is the Army National Guard different from other military branches?

Our mission makes us different. Unlike the other branches, Guard Soldiers can be deployed by the governors of their resident states to support communities stricken by natural disasters like floods and hurricanes. Guard Soldiers can also be deployed by the president of the United States to defend our country or support our allies overseas. This dual role for the Guard is what makes us unique.

What is the difference between the National Guard and the Army Reserve?

How is the National Guard different from Active Duty Army?

When you join the National Guard, your military service becomes your full-time job, and you will most likely be relocated to live on a military base. It’s a 24/7 commitment for the length of your enlistment. When you join the Guard, you will be required to attend a paid drill one weekend a month and attend paid Annual Training for two weeks every summer. When needed, you can be called into full-time, Active-Duty service. But the rest of the time, you live in your local community and have more flexibility to pursue your career or education.

Also, Active Duty Army fulfills a federal mission, while the National Guard serves a unique dual mission. Either the president of the United States or your state’s governor can deploy the Guard as needed, which means you might get called up to help out after a disaster in your city or state.

Is the National Guard part of the army?

Does the National Guard go to war?

The Army National Guard and the Air Force Air National Guard make up the National Guard. Guard members can be mobilized and deployed to protect the nation both domestically and internationally during times of war.

What does it mean when they call in the National Guard?

When a state governor activates the National Guard, it means that it is required to assist with a domestic crisis. Natural disasters, terrorist attacks, civil unrest, and war-like situations are all examples of crises. Aside from domestic missions, the federal government could even mobilize National Guard personnel for active duty for overseas military operations.

What jobs are available in the National Guard?

There are over 150 different jobs available in the Guard. Infantry, Air Defense, Medical, and Military Police are some of the careers available in this branch. Opportunities exist in intelligence, technology, engineering, aviation, and a variety of other fields.

Hope that this article helps you grasp all you need for joining the National Guard.

In addition to taking our sample tests, you may want to consult our study guides for additional study tips and information to help you improve your score even further.

Remember that you can take our free National Guard ASVAB practice test as many times as you want, and the questions will be reordered each time to provide you with a new learning experience. Let’s begin practicing right away!