Many people must take the ASVAB if they want to serve in the military. If you are thinking about joining the military, you should practice with these ASVAB Sample questions.

The Armed Services Vocational Aptitude Battery, or ASVAB, is a test that determines a person’s aptitude. The ASVAB generates an AFQT score, which determines enlistment eligibility as well as performance on each subtest. There are nine additional subtests that assess skills in areas such as mathematics and mechanical comprehension.

Questions in Arithmetic Reasoning test your ability for solving math word problems. You will need to take the mathematical information (numbers, relationships, etc.) as well as create an arithmetic problem, and then solve it to find the correct option.

Here are some ASVAB Sample questions from the Arithmetic Reasoning Section:

2. You are working in a hospital supply room and make $13.65 an hour. The union negotiates a new contract giving each employee a 4.3% cost of living raise. What is your new hourly rate?

Explanation: The correct choice is A. Compute the raise by multiplying the rate of increase by the hourly wage. To multiply a percentage, you must first move the decimal point 2 places to the left, so:

This gives us a $0.59 per hour raise. Compute the new hourly rate by adding the previous hourly wage and the raise:

3. At a used book store, Valentina purchased three books for $2.65 each. If she paid with a $20 bill, how much change did she receive?

Assembling objects is designed to test the ability to visualize spatial relationships. You have to perform such skills as viewing pieces of an object and then determining how those pieces fit together.

1. Which figure best shows how the objects in the left box will touch if the letters for each object are matched?

Explanation: The correct choice is A. Rotate the house block almost 180 degrees and rotate the circle almost 90 degrees to the right.

2. Choose the figure that shows the shapes assembled into an object.

Explanation: The correct choice is C. There are four pieces in the assembled puzzle, then we eliminate choice D. Two of the pieces are parallelogram, only choice C is accepted.

3. Which figure best shows how the objects in the left box will touch if the letters for each object are matched? 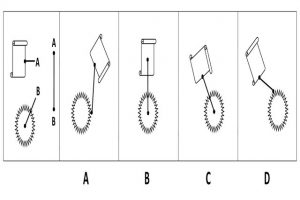 Explanation: The correct choice is C.  Rotate the scroll 45 degrees

The questions in Auto and Shop Information relate to common shop tools and fasteners as well as their uses. Those questions cover several areas commonly included in most high school auto and shop courses, like automotive components, automotive systems, automotive tools, troubleshooting and repair, shop tools, building materials, and building and construction procedures.

Some of the ASVAB Sample questions for the auto and shop information section:

1. Which of the following items is part of the braking system in an automobile?

D. all of the above

Explanation: The correct choice is D.  When the brake pedal is pressed, it operates the master cylinder, which forces the brake fluid through the lines out to each wheel. The pressure in the brake lines causes the calipers to move and press the brake shoes against the brake drum. This causes the automobile to slow down.

2. A hammer with a regular striking face and, on the opposite face, a rounded end is called a:

Explanation: The correct answer is a ball-peen hammer. A ball-peen hammer has one flat striking surface and an opposite rounded surface used for shaping metal and making gaskets.

3. The brake caliper is an assembly that houses the ____.

B. brake pads and pistons

Explanation: The correct answer is brake pads and pistons. Disc brakes slow the rotation of the wheels using friction, which is created by pushing the brake pads against the brake discs with a set of calipers.

1. Which of the following is NOT a characteristic of a step-up transformer?

A. has more turns in the secondary winding than in the primary winding

C. the primary voltage is higher than the secondary voltage

D. the secondary voltage is higher than the primary voltage

2. Which of the following is not an application of a transistor?

General Science’s questions test your understanding of a variety of science topics from courses that have been taught in most high schools such as botany, zoology, anatomy, physiology, and ecology.

Some of the ASVAB Sample questions for the general science:

1. The sun’s energy reaches the Earth’s surface primarily in the form of:

Explanation: The correct choice is D. The sun’s energy reaches earth in the form of visible light. Some ultraviolet radiation does reach the Earth’s surface, but much of it is blocked by the ozone layer and particles in the atmosphere.

2. What is the molecular weight of the compound C2H5OH?

3. Which of the following cloud types occur at the lowest altitude?

The questions on Mathematics Knowledge are designed to test whether or not you can solve problems by applying knowledge of mathematical concepts and applications.

1. The surface area of a rectangular prism with sides 3 x 5 x 5 inches is:

Explanation: The correct choice is A. The area of each of the three unique sides are 15, 15, and 25. We need to double this area because each side is mirrored in a rectangular solid. This gives us a total surface area of 110 square inches.

2. The diagram shows parallelogram ABCD. What is the measure of angle A if angle D measures 117°? 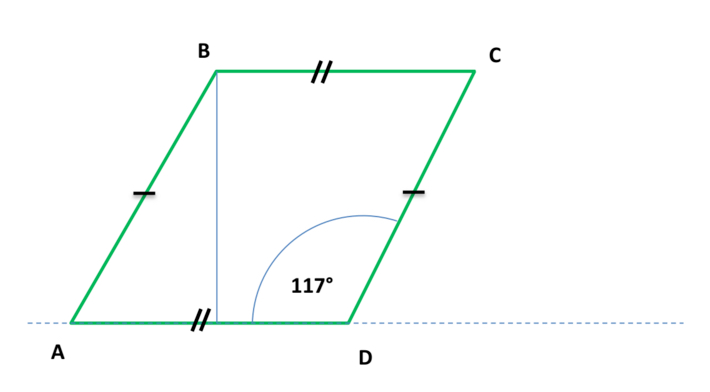 Explanation: The correct choice is D. In a parallelogram, opposite angles are equal, thus:

Explanation: The correct choice is B. A prime number is one that can be divided evenly only by itself and 1. All of the other choices can be divided by numbers other than just 1 and the given number.

Some of the ASVAB Sample questions for the section:

1. There are three beams that are each 10 feet long and all of the same size. One is made of wood, another of steel, and the third of concrete. If identical loads are applied to these three beams, which of the following will happen?

A. The concrete beam will deflect more than the other two.

B. The steel beam will deflect less than the wood beam.

C. The wood beam will deflect less than the concrete beam.

D. The wood beam will deflect less than the steel beam.

2. An 80-lb child is sitting on one end of a seesaw. If another 80-lb child jumps from a high platform onto the other end of the seesaw, what will happen?

A. The first child will be lifted into the air, but remain seated.

B. The first child will bounce off the seesaw into the air.

C. The first child will stay stationary on the ground.

D. The second child will bounce off the seesaw into the air.

Explanation: The correct choice is A. The force of the second child landing on the seesaw will propel the other end of the seesaw into the air.

3. Which of the following statements is true for water flowing from a 4-inch pipe to a smaller 2-inch pipe?

B. The pressure is greater in the 2-inch pipe

C. The pressure is lower in the 4-inch pipe

D. The same amount of water passes through both the 4-inch pipe and the 2-inch pipe

Explanation: The correct choice is D. Water cannot be compressed. Therefore, the same amount of water must be flowing through both the 4-inch pipe and the 2-inch pipe.

Paragraph Comprehension, just as it’s named, is designed to gauge the ability whether or not you can get information from written material. You will be reading paragraphs and then demonstrating your comprehension of those paragraphs by answering questions.

Here are some ASVAB Sample questions for the section:

1. Paragraph: DNA stands for deoxyribonucleic acid. It has proteins attached to it and exists in the form of chromosomes. DNA in chromosomes contains the information that determines all of the physical characteristics that were inherited from the previous generation. Although some features of DNA differ from species to species, many things about DNA remain the same, regardless of the parent organism. Strawberries, for example, have DNA.

What does this author imply?

A. DNA is only found in the organism’s parents.

B. all species have similar physical characteristics.

C. species are subdivisions of a genus.

Explanation: The correct choice is D. The author mentions the similarities of DNA between all organisms and then uses strawberries as an example of this in the very next sentence. This implies that strawberries are organisms.

2. Paragraph: In general, most people think of culture as a set of behaviors belonging to a group sharing common values, history, and traditions. This group may call itself a community, but this does not mean that those in a common culture necessarily live in the same neighborhood, or even nearby. But, it does mean that they share norms for what is expected in their culture.

According to the passage, people in a community will:

B. live in the same neighborhood.

Explanation: The correct choice is A. “Norms” are standards and patterns of social behavior. If they “share norms,” this suggests that they follow the same standards. It may be likely that they speak the same language or share some of the same knowledge, but the passage doesn’t state that this is necessarily true.

Read more >> Is the ASVAB Required in High School?

Word Knowledge measures your vocabulary knowledge. In another word, Word Knowledge tests the ability to understand the meaning of words through synonyms — words having the same or nearly the same meaning as other words. The test is a measure of just one component of reading comprehension since vocabulary is one of many factors that characterize reading comprehension.

Explanation: The correct choice is A. The words are synonyms. “Denial” is a declaration of untruth, “foreclosure” is the takeover of a mortgage because of non-payment, and “striation” is a series of ridges, stripes, or linear marks.

2. He maintains a very busy schedule. The word maintains most nearly means ____.

3. The suite at the hotel was opulent. The word opulent most nearly means ____.

Explanation: The correct choice is B. Opulent means luxurious or wealthy.

As we all know, the ASVAB test is used as an initial indicator of your abilities and knowledge. Those ASVAB Sample questions can help you decide if this is something that interests you and prepare for the ASVAB!