Since the United States declared independence from the British in 1776, the uniforms of its troops have changed dramatically.

Uniforms have evolved over time to reflect different eras and conflicts, as well as to take advantage of tactical and technological advancements. As this article from US Army Uniform history points out, some of the changes were minor, while others significantly altered the appearance of the US Army. We gathered a variety of paintings and old and current photographs, including some of the war re-enactors, to highlight the evolution of U.S. military uniforms.

Read the United States Army uniform history below to see how the uniform has evolved over time.

The US Army uniform was modeled on the British military during and immediately after the Revolutionary War. The blue coat of the Continental Army distinguished it from other militaries. In addition, white overalls and waistcoats were worn with the uniforms. Tightly fitting small clothes (waistcoats and breeches) and jackets with tight-fitting sleeves were popular at this time. In general, each soldier was outfitted in a wool regimental coat with linen smallclothes in the spring and a wool regimental coat with woolen smallclothes in the fall.

The Army uniform was blue with colored facings depending on region, with white for New England, red for the Mid-Atlantic, and blue for the South, according to regulations issued in 1779. Musicians wore reverse-colored uniform coats. Except for generals and staff officers, blue coats with red stripes became common in 1782.

In terms of uniforms, the year 1812 was a bit of a mess. During the winter of 1812-1813, coatees made of drab, black, brown, or gray cloth were provided to several Regular Army infantry regiments due to a shortage of blue cloth. These were produced in the same way as the standard coatee, complete with red cuffs and collars and, in most cases, white binding. (Blue coatees with red cuffs and collars were issued to the 25th through 28th Infantry Regiments, with white binding lace on the collar only.) The white binding was abandoned entirely in February 1813.

The uniform regulations were changed once more in May 1813. The new uniform coatee was single-breasted and featured a 10-button front closure. For infantry and artillery, the red collar and cuffs were eliminated, and lace binding was confined to white or yellow. The regulations also included a new cap or shako, which was modeled after the British Infantry’s Belgic-style cap. This uniform remained in use until the 1820s, with very small changes.

The uniform requirements were changed in response to changes in the Army structure. The laws of 1833 established a standard coatee that was similar to its predecessors. For privates, it was single-breasted with nine buttons in the front and lace on the collar. Worsted epaulets replaced the earlier shoulder wings, and the buttons were of a new pattern. Infantry wool lace remained white, whereas artillery wool lace remained yellow. Yellow lace was also given to the new dragoon regiment.

Although branch insignia was created, the metal color remained yellow for mounted soldiers and white for foot troops. An eagle with a hunting horn for infantry and an eagle with crossed gun tubes for artillery were among the new branch insignia approved in 1833. A bi-metal insignia of a yellow federal eagle on a white metal sunburst was given to the light dragoons regiment.

By the time of the Mexican-American War in 1845, the US Army uniform had undergone yet another transformation. Soldiers started wearing roundabouts made primarily of blue wool. In addition, the pants would have yellow vertical stripes and chevrons on the sleeves to indicate their rank. The Army also switched to forage folding caps in place of tombstone caps.

In 1851 a new uniform requirement established a system of branch colors and chevrons. The uniforms developed under the 1851 regulations were only in use for a short time, but the alterations were crucial for the Army. The frock coat was approved as the standard service uniform for all soldiers, obviating the need for the coatee. Prussian blue for infantry, orange for dragoons, scarlet for artillery, green for mounted rifles, and black for staff were introduced as branch colors.

Soldiers’ uniforms during the American Civil War (1961) differed from those used during the Mexican-American War. Soldiers began wearing brass branch insignia to show off their regiments; a frock coat with branch piping for foot troops; uniform coats with branch-colored lace for mounted troops; and sky-blue trousers and different hats were put into service. Soldiers, however, wore a wide range of uniforms according to the nature of the conflict.

The Army made considerable alterations based on field experience and recommendations during this time. The Army chose the “Swiss blouse” recommended by Assistant Surgeon Alexander Woodhull for field service. Four pleats ran down each side of the front from the shoulders to the bottom of the skirt, making this outfit stand out. The pleats were revolutionary in that they introduced the concept of layering. In cold weather, the coat was loose enough to be worn with up to three wool shirts and a waistcoat while still allowing for ease of movement.

When World War I broke out in August 1914, army uniforms were impacted almost immediately. World War I uniforms are mainly identifiable. Although the color changed from brown to olive, the khaki fatigues from the Spanish-American War remained remarkably similar. Soldiers wore puttees across their legs and adapted the British Brodie Helmet.

Except for soldiers performing mounted duty, summer and winter service breeches were discontinued in 1938. Pattern 1937 military trousers, in olive drab light shade wool serge for winter and cotton khaki for summer, was changed.

The blue denim fatigue uniform was phased out in May 1941, and an olive-drab, herringbone cotton twill uniform was introduced in its place. The new uniform was single-breasted, with five black metal tack buttons on the front and two more buttons on the waistband. A fall collar, notched lapel, and two patch-style breast pockets with a split pleat in the center and a flap secured by a single metal tack button completed the jacket.

The uniform was designed to withstand fatigue and be used in the field. An updated version was released in November 1942. The breast pockets were enlarged larger with a bellows gusset on the outer edge, and the waistband was removed based on field experience. HBTs were utilized as chemical protective clothing, especially during the Invasion of France in June 1944, because they were treated with an anti-vesicant compound. The hue of HBTs was changed to a darker olive drab shade 7 in March 1943, thanks to a specification revision.

one during the Korean War and more durable cotton with the same weight as herringbone twill was developed. The material was utilized to make the new utility shirt and trousers known as OG107s, which weighed 8.5 oz and were manufactured in Olive Green shade 7.

The uniform, like its predecessor, was designed to be loose-fitting and used for work purposes. The garment, which was made in late 1952, has straight sleeves and upper patch pockets on the chest with rectangular buttoned covers (this came to be known as the Type I). Large patch pockets on the hips, two back pockets with rectangular buttoned flaps, and waist adjustment tabs were all features of the trousers.

In 1954, the Army began making changes to its uniform that it had been considering since shortly after World War II ended. One of the most important reasons influencing decisions about the new uniforms was the Army leadership’s belief that officers and enlisted uniforms should be identical, with only insignia separating them. Although the reforms began in 1954, they would not be fully implemented until the end of the decade.

The Army green uniform in shade 44 was adopted in September 1954, but it wasn’t until September 1956 that it became sold at Quartermaster Clothing Sales Stores — and in late 1957 that it was distributed to inductees. The green uniform became mandatory service clothing in September 1961, following a transition period to allow existing uniforms to be worn out.

In 1963, tropical battle apparel was classified for production and issued to Vietnam soldiers. Tropical combat coats came in three basic styles. The first one had two slanted bellows-type breast pockets and two bellows-type bottom pockets made of wind-resistant cotton poplin in olive green shade 107. Two open plastic buttons on the flaps, an internal button above the gas flap, shoulder loops, and a waist adjustment tab with two buttons on each side were all included in the pockets. The second pattern coat was almost identical to the first, except that all of the buttons were covered to prevent snagging in the jungle.

The Army developed the battle dress uniform, or BDUs, on Oct. 1, 1981. The coat, which was based on the tropical battle uniform of the Vietnam War, was made of a nylon and cotton blend in woodland pattern camouflage with matching trousers and a field cap. The Army approved the usage of the old tropical battle uniform for several years while changes were made after combat experience in Grenada revealed that the BDU uniform was too hot for tropical conditions. 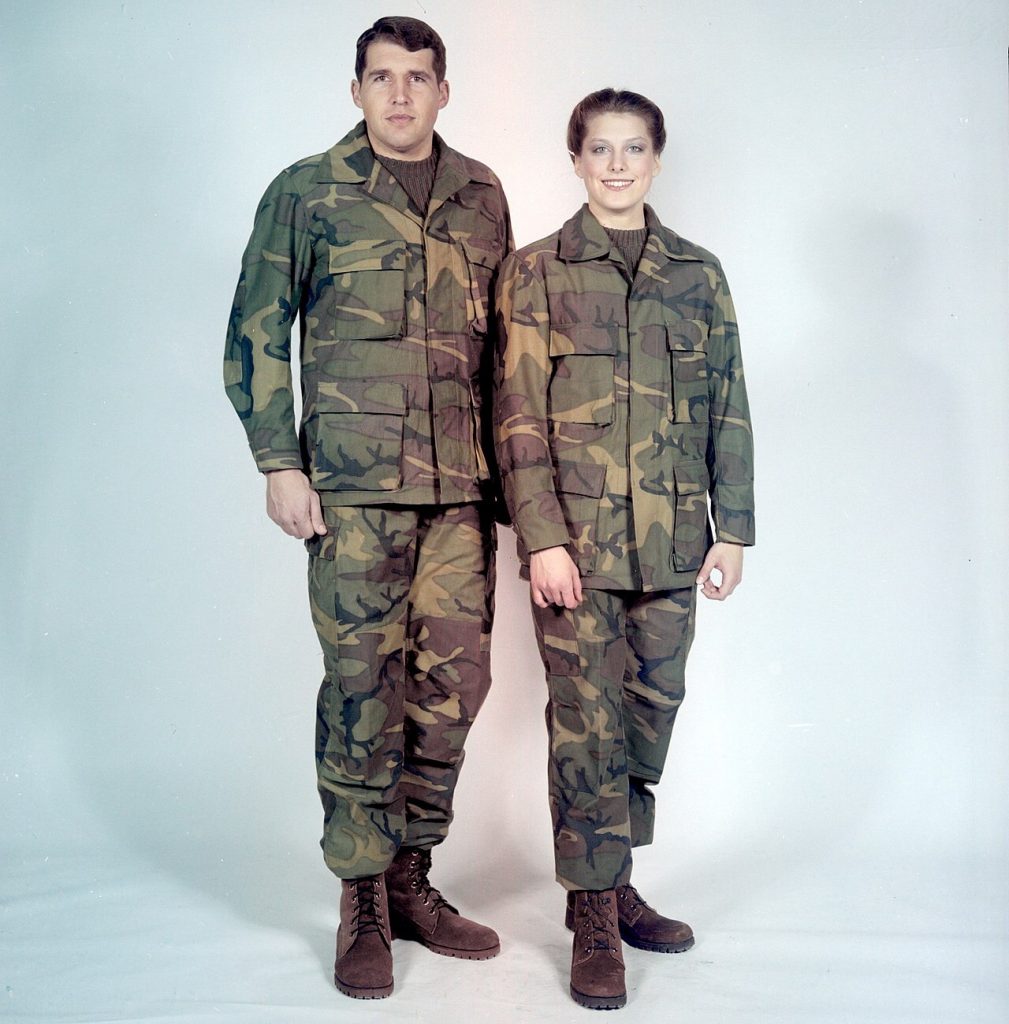 The Army had adopted a variety of camouflage patterns by the time of Desert Storm in 1990. These motifs included woodland and three-color desert patterns at the beginning. The new uniforms also had certain stylistic alterations, such as the collar being smaller. 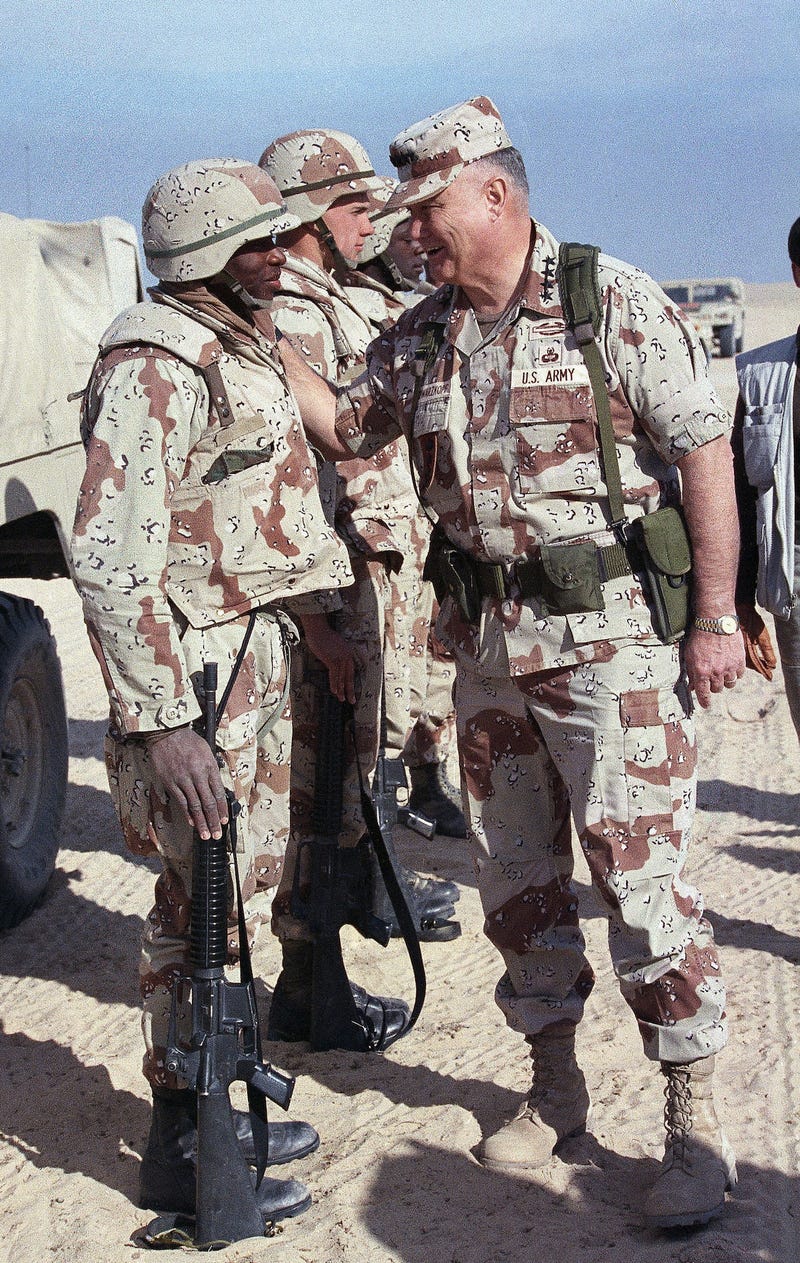 Since 1991, the Army has altered its camouflage patterns regularly. The Army Combat Uniform (ACU), which was designed by the Marines’ digital pattern uniform, was introduced in 2004. Moisture-wicking socks and a T-shirt, as well as a coat, pants, combat boots, and a patrol cap, are all included in the full ACU.

The Army Combat Uniform’s camouflage pattern has changed at least twice since 2010, commencing with the Operation Enduring Freedom, or Multicam, design in 2010.  The Army modified the ACU pattern to the Operational Camouflage Pattern in 2015, and it became required on October 1 of that year. The colors of the new pattern vary depending on where it’s used — for example, desert vs. forest — but it generally uses a four-to-six color palette that includes greens, beiges, browns, tans, and greys.

The OCP has been optimized for efficiency in all of the Army’s possible operational operating environments. It’s also been updated to work better at night. The Army’s Project Manager Soldier Protection and Individual Equipment, Col. Bob Mortlock, explained the distinctions between OCP and Multicam patterns to Military.com in 2015. 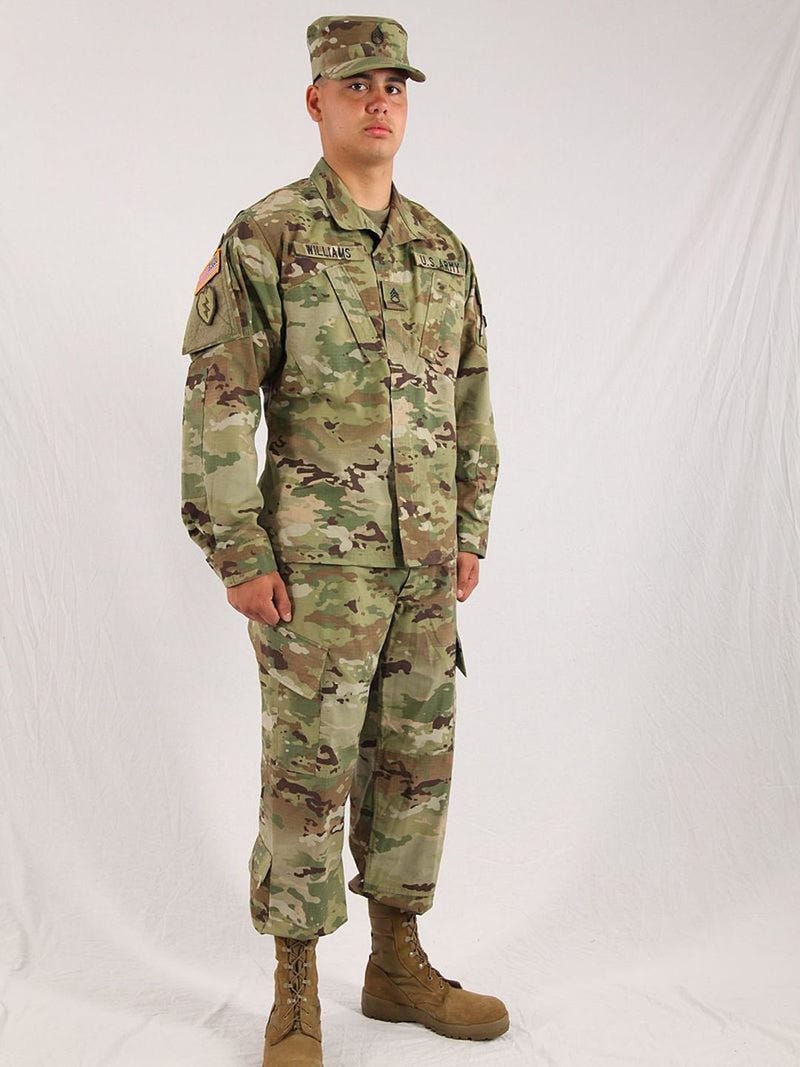 Since the country’s independence from the English in 1776, the uniforms of the United States Army have changed dramatically. The preceding article goes into great detail about the history of the US Army Uniform. I hope you find this information useful. Don’t forget to take our free ASVAB practice test to ensure you pass the exam on your first try.